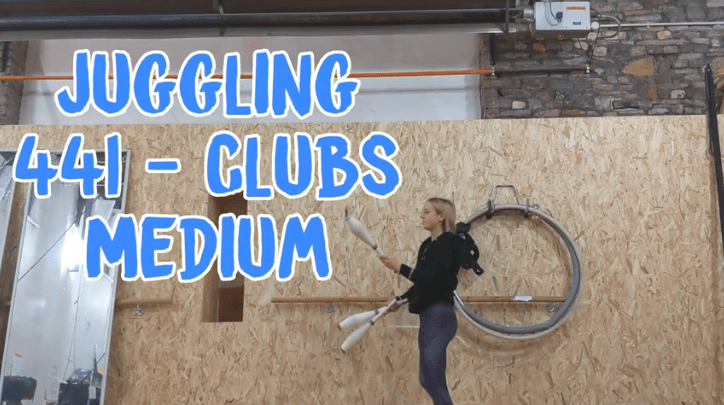 Safety Warning: Be careful not to hit anyone or anything with your clubs as they can hurt or do damage. Make sure you have plenty of space.

Els shows you how to do a clubs 441 trick. 441 is a siteswap, which is a ‘numeric juggling notation…something something…’ – maybe just google it like Els did!

All you need to know for this particular siteswap is what a ‘4’ is and what a ‘1’ is. 4 is a straight double (two rotations of the club in the air) caught with the same hand that you threw it with. 1 is a simple passing the club to the other hand (no throwing). So, a 441 is a double, a double, then a pass from one hand to the other.

Els shows you how to build up to the trick in sections:

This is a very good trick for practising your doubles. To begin with, practice throwing a double and catching with the same hand you threw with. Practice on your right hand and your left hand. Then, put them both together – throw with your dominant hand first.

Next, add in the correct timing – throw the second double before the first one lands, in a ‘one-two’ count pattern.

Before you add the third club, do the same again with two clubs but add in a clap – so double, double, clap. This represents the ‘1’ that you are about to add in.

When you’ve got the hang of this clubs 441 move, try starting with your other hand. That way, you can repeat the pattern continuously – starting with a different hand each time.

If you’ve gotten really good, why not try adding a flourish such as passing the club behind your back? You can add this move to a solo juggling routine, and it also works in passing.

You can see all our clubs and other juggling video tutorials by tagging ‘juggling’ on our Youth Circus Home Edition library page here.