Here at Circomedia, we have teachers from a multitude of circus and performance experience. Brining a wide range of expertise to our ever-growing academy.

Lex joined Circomedia as head of Movement in 2011, and has been Head of Undergraduate Studies since 2018.  She currently teaches dance technique & Creative Movement, and is Module Coordinator for the Final Major Project module on the BA(hons).

Lex is passionate about teaching dance and choreography, and has worked in a variety of settings, from Senior Lecturer in Dance at Bath Spa University, to Youth & Community Outreach work with the Mama Africa Project and Train of Thought.  Lex is External Examiner for the BA(hons) in Dance, Aerial & Physical Theatre at the University of Chichester and a Fellow of the Higher Education Academy.

The Bureau of Random Acts 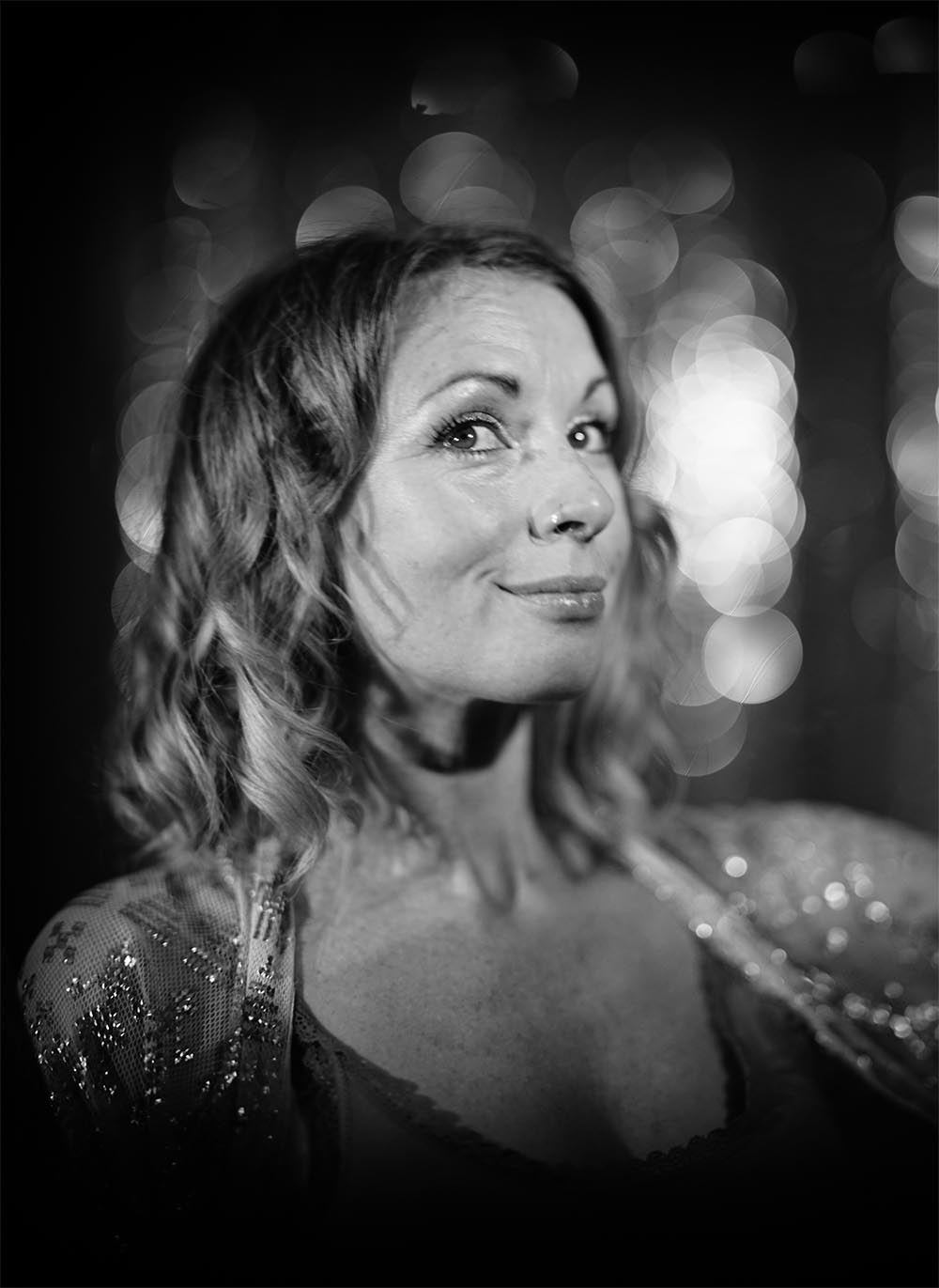 Deputy to Head of Undergraduate studies

A World Record breaking Gentleman and Ping Pong juggler. For nearly 30 years Rod has been a unique and sought after speciality artist performing all over the world in Cabaret, Variety and on TV including twice receiving standing ovations on legendary French TV show “Le Plus Grand Cabaret Du Monde.”He has won medals at World Juggling Championships in the USA, at the Paris Variety festival and a Herald Angel award at the Edinburgh Festival. He represented the UK at the inaugural “Kamiwaza” TV variety show in Japan and has set a world record on Chinese TV. He recently appeared at the iconic Berlin Wintergarten Theatre and was also one of the few British Jugglers to appear in the Karl-Heinz Ziethen book “The Virtuosos of Juggling.” He had a long stint as resident Juggler at the Hippodrome on Saturday nights in London’s West End and is joint artistic director of the Decadent Rabbit cabaret.Alongside his performing career Rod is very proud to have been Head Juggling teacher at Circomedia since the early 90s. Until recently he held a similar position at the National Centre for Circus Arts in London before deciding to expand and concentrate on his Circomedia career. 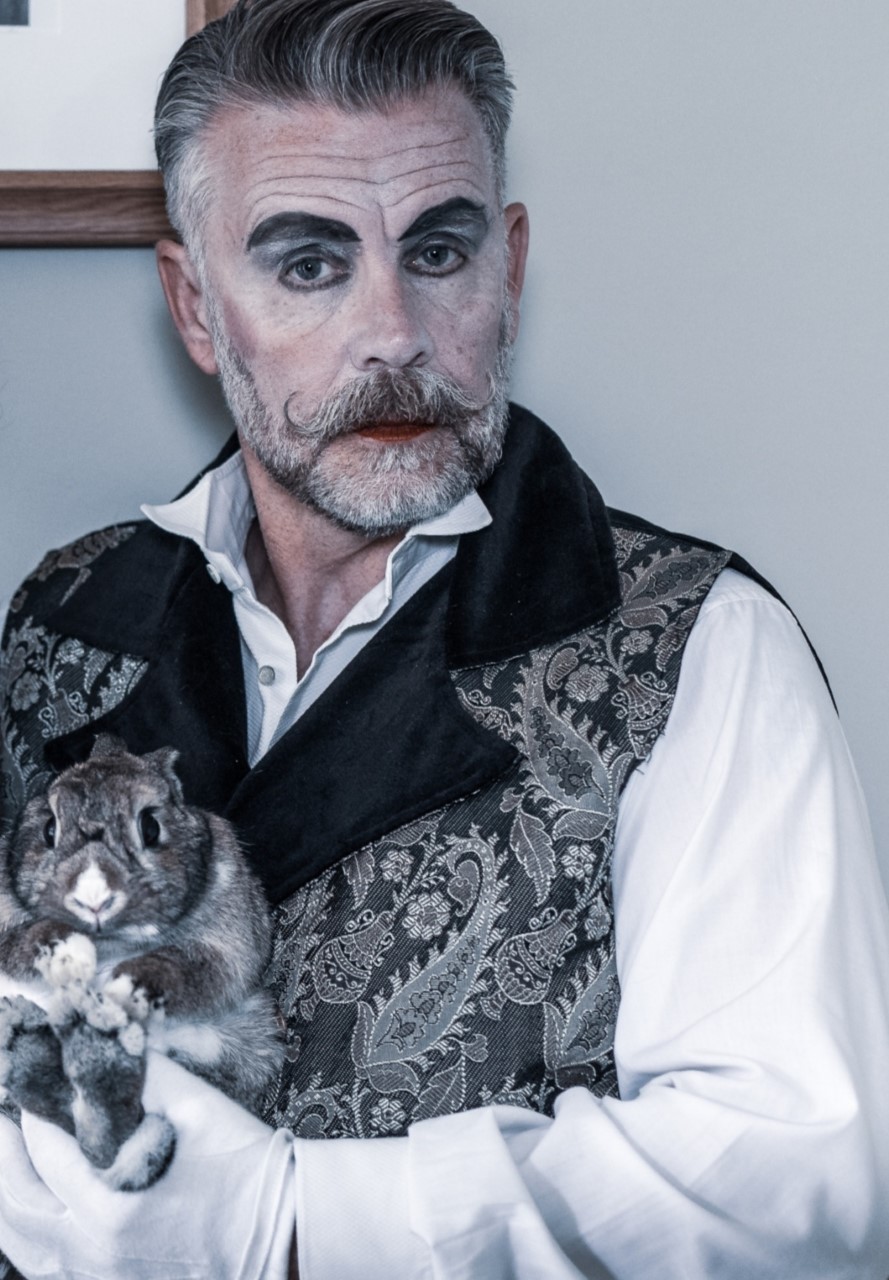 Originally trained in Physical Theatre and receiving a BA (Hons) Degree from the University of Leeds, Jono has since been training and teaching circus for over a decade. Starting out working in the United States after completing his Masters Degree, he travelled and trained across the US, Canada, and Australia before settling back in UK. He teaches aerial, specialising in dynamic, solo, and doubles trapeze.Jono works for Circomedia as Classes Manager, overseeing one of the largest Youth Circus organisations in the UK, and also an aerial teacher for both the Further Education, and Higher Education Courses. 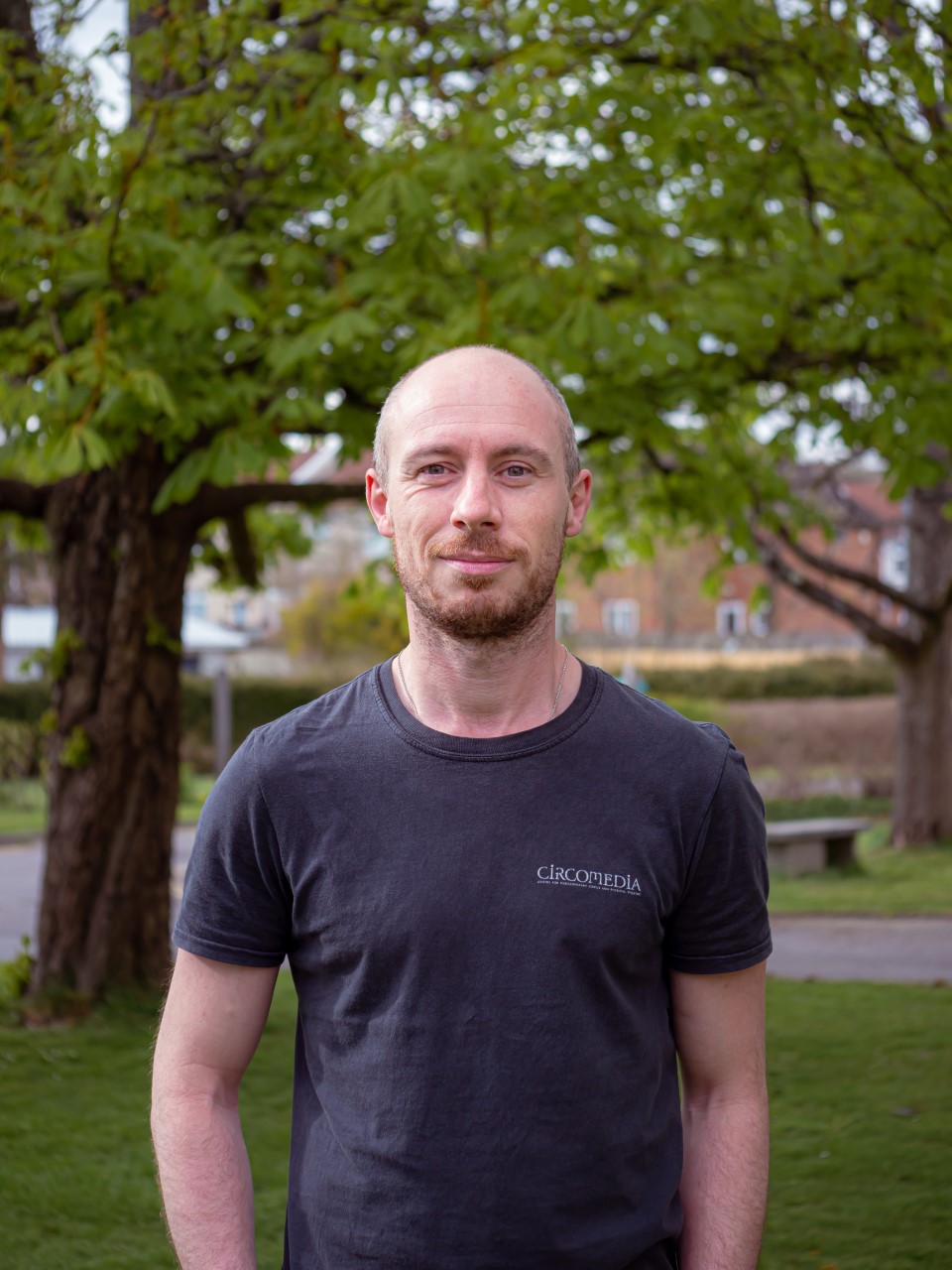 George Fuller is an American (Chicago) performer and teacher based in the UK. He specialises in street theatre, mime, clowning, improvisation, contemporary circus, dance and cabaret. His circus experience includes touring with NoFit State Circus, Midnight Circus, Crashmat Collective, and Herbie Treeheads Dinasaur Circus. He is currently touring The Rest of Our Lives which is a contemporary dance performance with Jo Fong. This piece was commissioned by the RTN and supported by The Place. George, under the pseudonym George Orange, continuously tours his solo outdoor show ‘Man On The Moon’. For 11 years he has acted as artistic director of Mary Bijou Cabaret and Social Club which presents queer and feminist contemporary cabaret.

Current show: The rest of our Lives 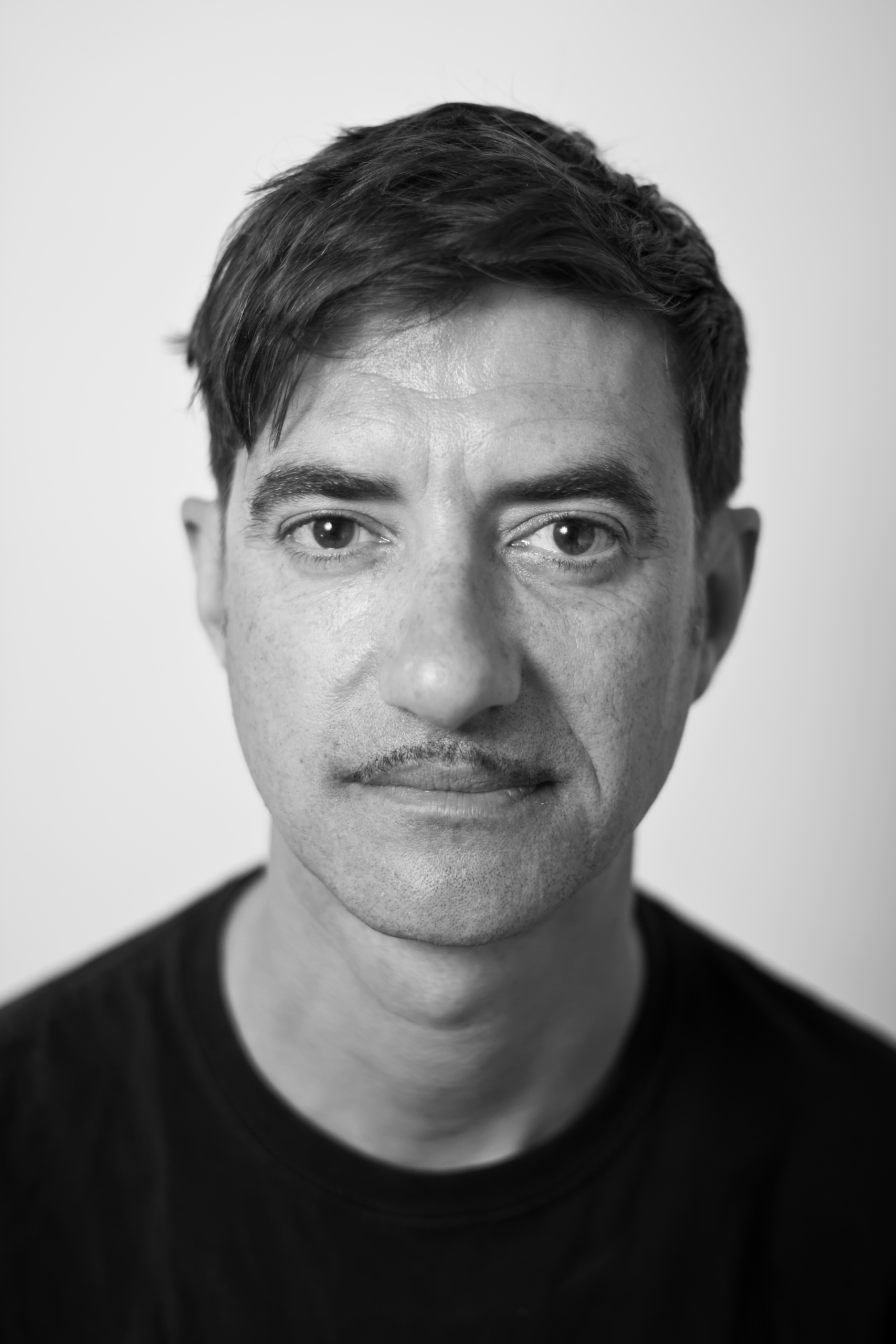 Cat originally trained in European Theatre Arts at Rose Bruford College in London. Following this she worked as an actor for 10 years, with a particular focus on performing for young audiences, adults with Profound Multiple Learning Disabilities and integrated D/deaf and hearing audiences, with Nottingham Playhouse, Red Earth Theatre and The Play House in Birmingham. She also worked briefly as a kids’ TV presenter. In 2011 Cat came to study at Circomedia for 3 months to learn how to integrate circus into her work as an actor. She left 2 years later with a desire to direct rather than perform, and founded Can’t Sit Still, an arts organisation based in South Gloucestershire that uses circus, physical theatre and live music to make projects and show with and for unusual audiences, often in unusual locations. Cat has directed all of Can’t Sit Still’s shows to date, including Plink and Boo, a circus theatre experience for 2-5 year olds and their grown ups, and Oh No, George! an adaptation of an award winning children’s book that will be on national tour again in Spring 2022. Cat is a parent to a six year old child and a one year old labradoodle, and has a slightly unhealthy obsession with cooking magazines. 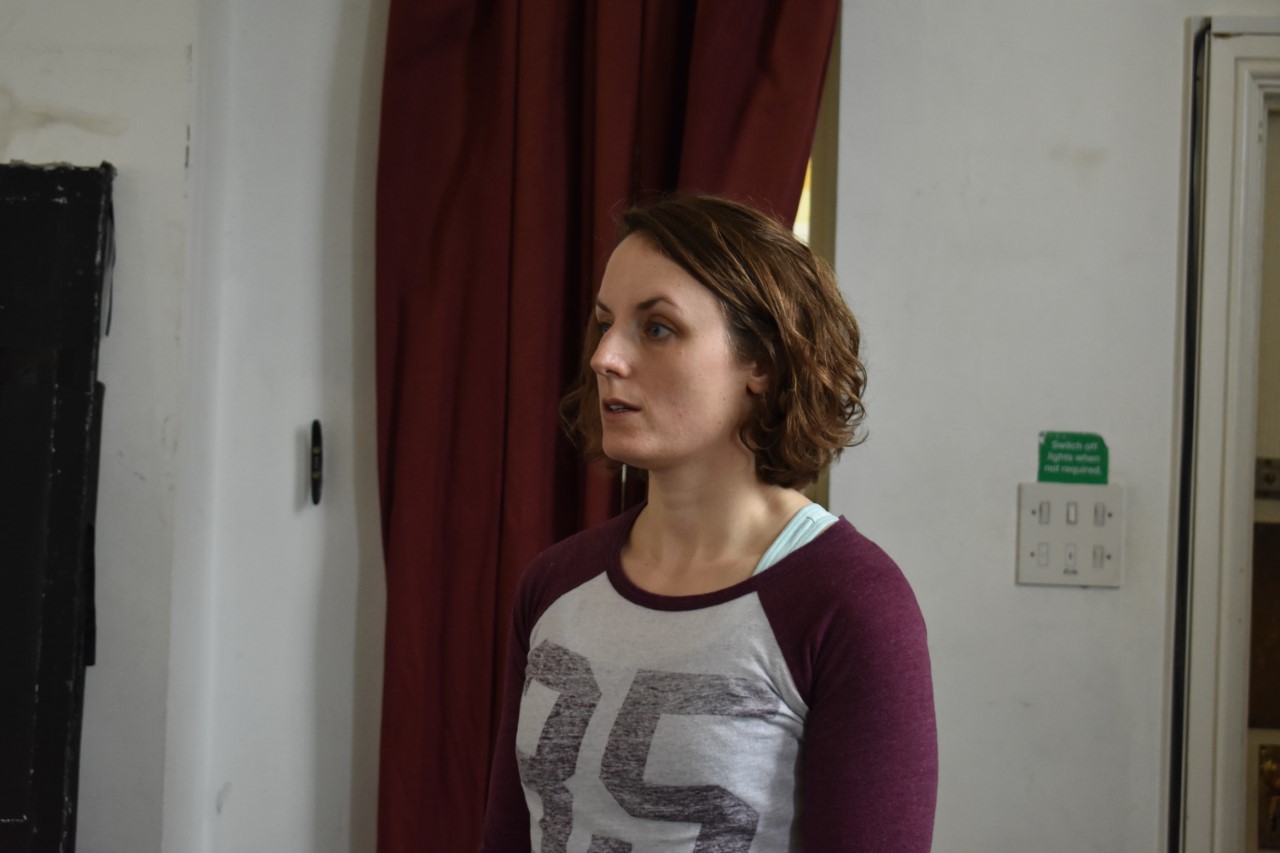 Robin studied at Circomedia between 2013-16, specialising in physical comedy and object manipulation. Since graduating he has toured extensively with his solo theatre show What Does Stuff Do?, including with the Best of BE Festival tour in 2017 & 2018. He is one third of the infamous bar flair trio Shakedown, and a founding member of juggling theatre company Broken Box Collective. Robin also performs cabaret and variety acts, and as guest juggler for companies including Living Room Circus and Gandini Juggling. 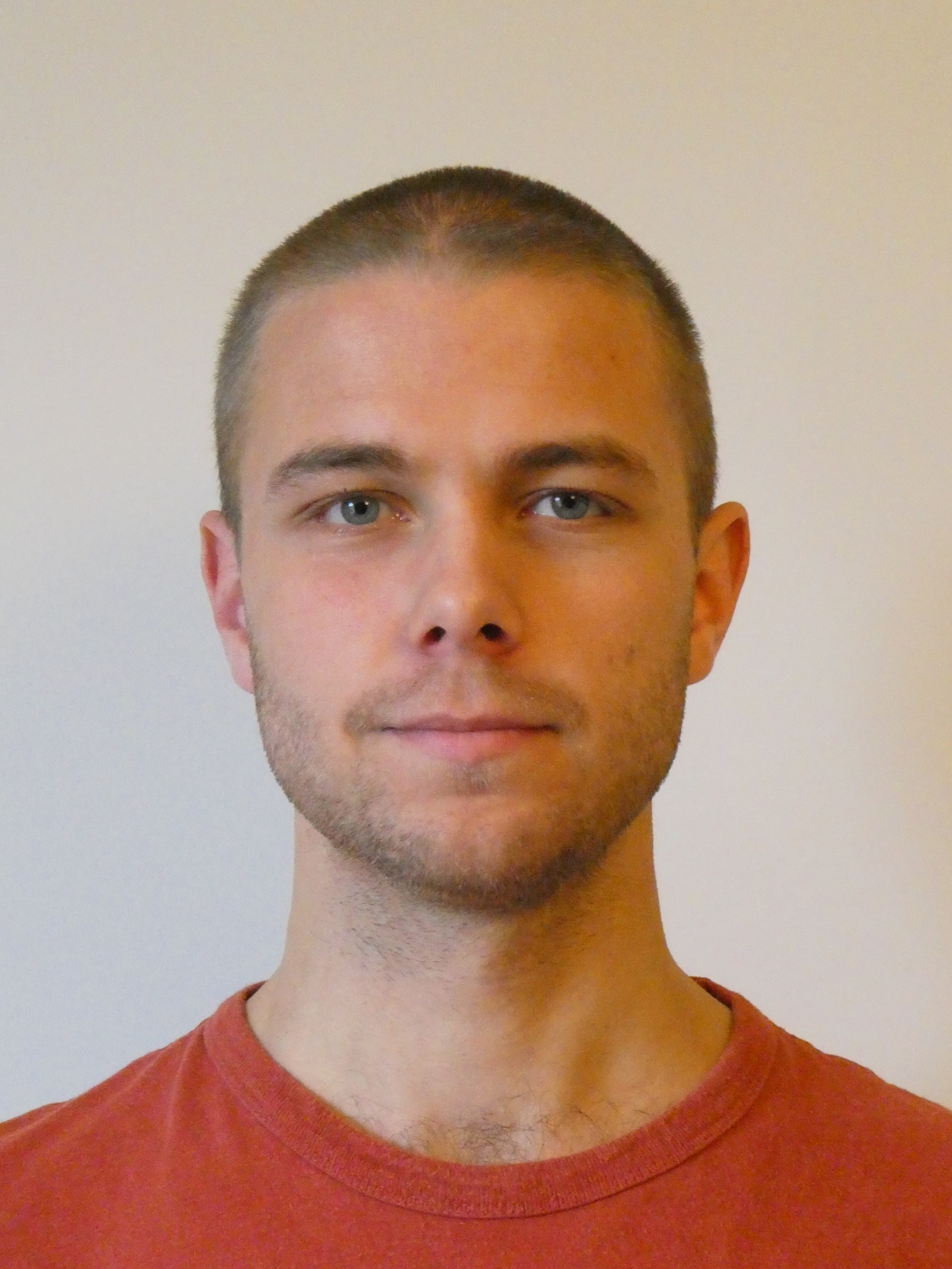 Born in Dublin, Owen started his performing career in his teens with Bui Bolg working at the major festivals across Ireland. Keen to pursue his new found career, he went to study at Circomedia, Bristol, where he specialised in Juggling and Doubles Trapeze, and later obtained a Teaching Certificate in circus skills. After Graduating in 2001, Owen worked as Head of Juggling on the degree program at the National Centre for Circus Arts (The Circus Space), London, and continues to teach there as a guest teacher on the degree programme.Over the past 15 years, Owen has performed and contributed to many of Gandini Juggling’s productions and he continues to tour with them in Smashed and 4×4:Ephemeral Architectures. In 2018 he was Educational Officer for Gandini working with 60 young jugglers across the UK and culminating in a large site-specific performance in the iconic fountains at London’s Somerset House. More recently, he co-created a piece of children’s circus with juggler, Arron Sparks, which focused on themes of determination and life choices. In 2020, Owen was awarded a grant from the Arts Council England to pursue his love for teaching and working as an educator in circus – prompting his new venture “Circus Academy” to be created. 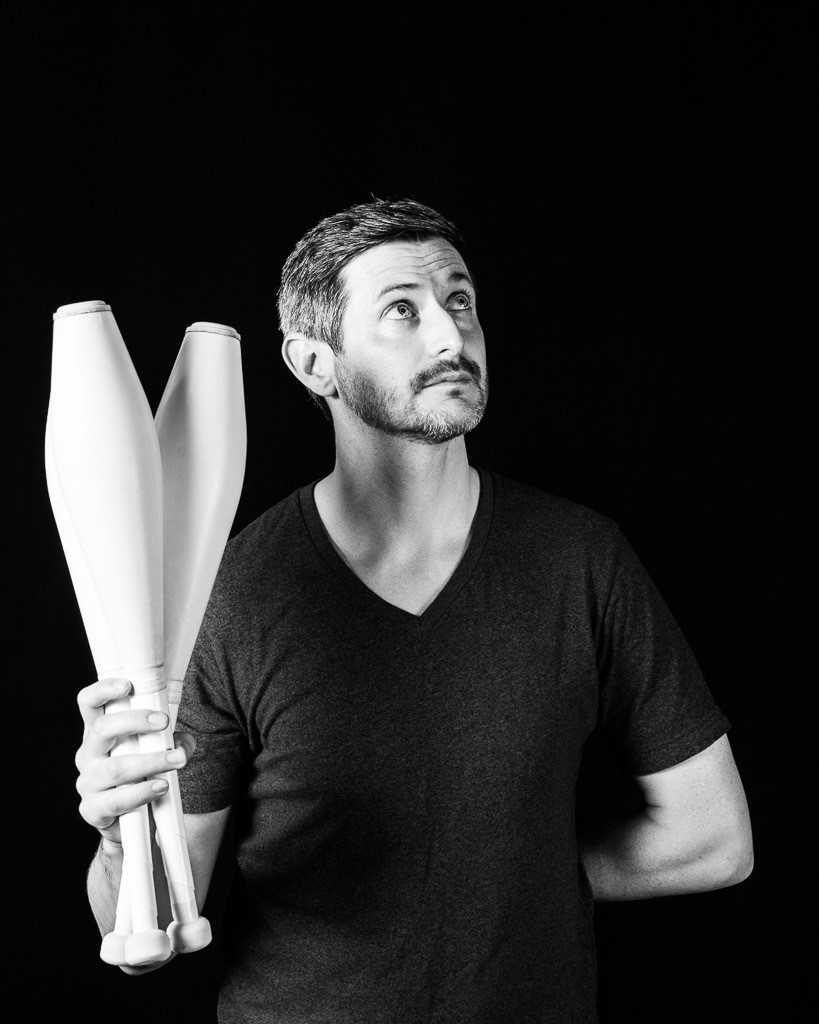 Natalie is a movement director and performer working primarily within the circus world. Her work is about the powerful way that physical performance and the arts can be harnessed to explain concepts and make meaningful analyses of our world

She is the Director of Le Physical and Co-Director of The Learning Circus. She has directed in a freelance capacity for companies such as Mirabella Arts on their environmental show  ‘The Silent Forest Circus’ highlighting the plight of the Asian songbirds. and has been working with Stav Meishar on how applied analysis of movement can explore gender performance through the Barbette Project. Other works include; The System, Digital Experiments, Conflict Resolution, Multi-Me, Around, Mad Science, Murder Mystery, All Hallows Eve, and The Tipton Project.

She is a freelance director, performer, musician, and teacher. 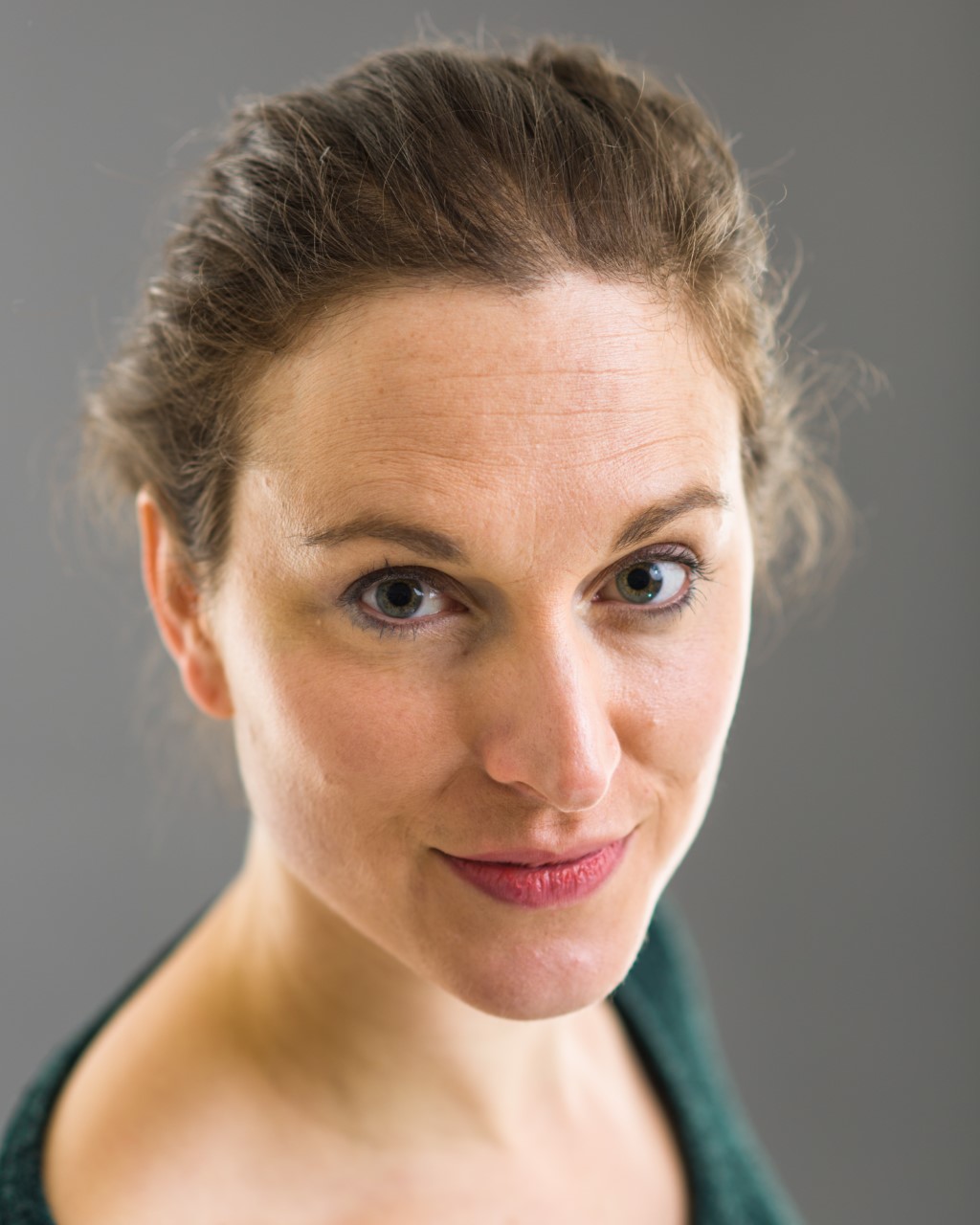 Lisa studied acrobatics and aerial here at Circomedia, as well as gaining her Teacher Training Certificate with us. As a professional performer, she has toured the world and taken her skills and talent to countries as diverse as Myanmar, Israel, Turkey, the Czech Republic and Germany. Lisa’s career has included performing on TV, in adverts, at corporate gigs, festivals, galas, theatre shows and within traditional circus. 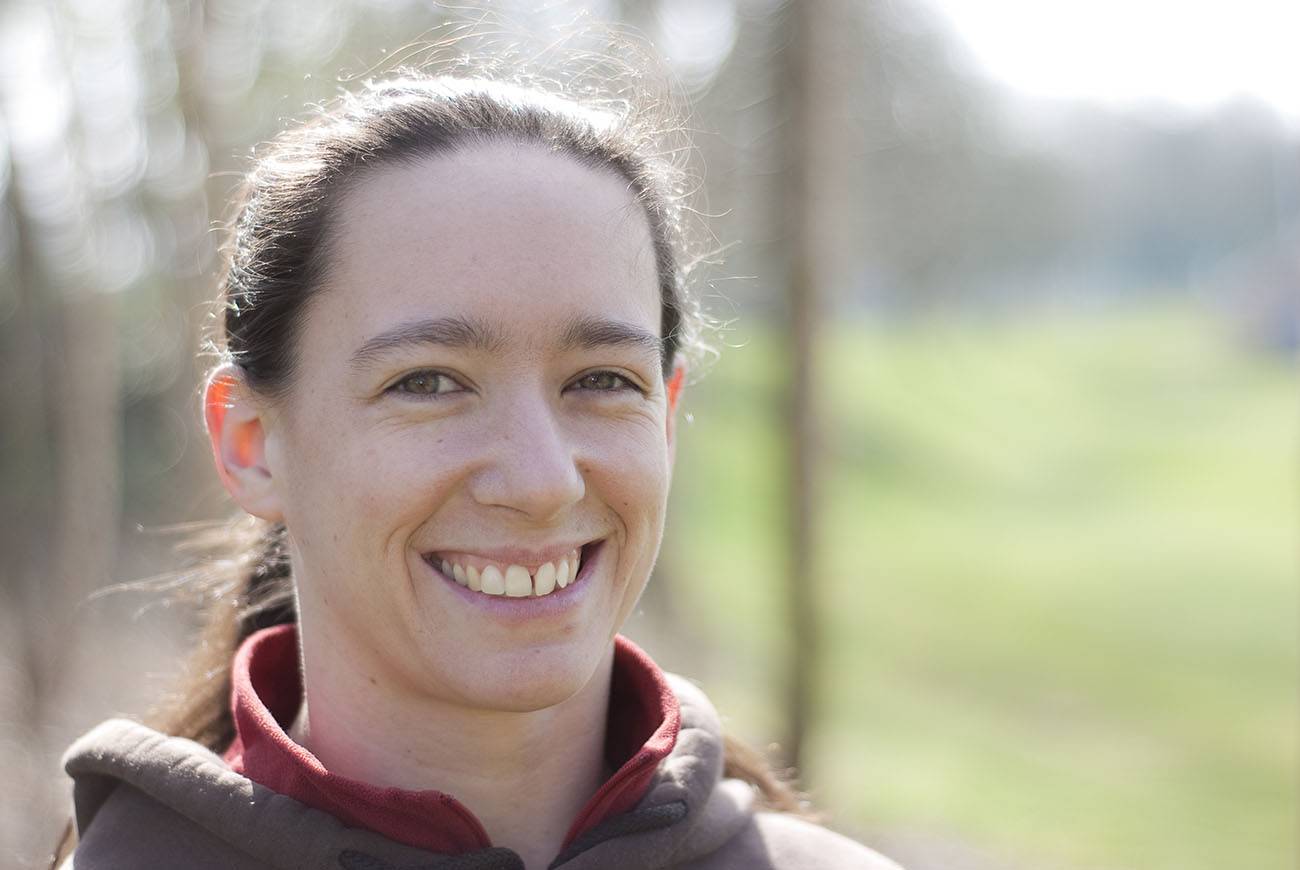 Rowan graduated from Circomedia’s BA in 2018. Rowan is part of the technical team working on sound, lighting and rigging for students performances and visiting shows to Circomedia’s Portland Square theatre venue. As an acrobat Rowan teaches handstands and tumbling core skills on the FDA/BA course as well as teaching a filmmaking class. Additionally Rowan teaches on the Circomedia youth circus. Outside of Circomedia Rowan is a freelance filmmaker with a love of flying trapeze and games of all kinds. 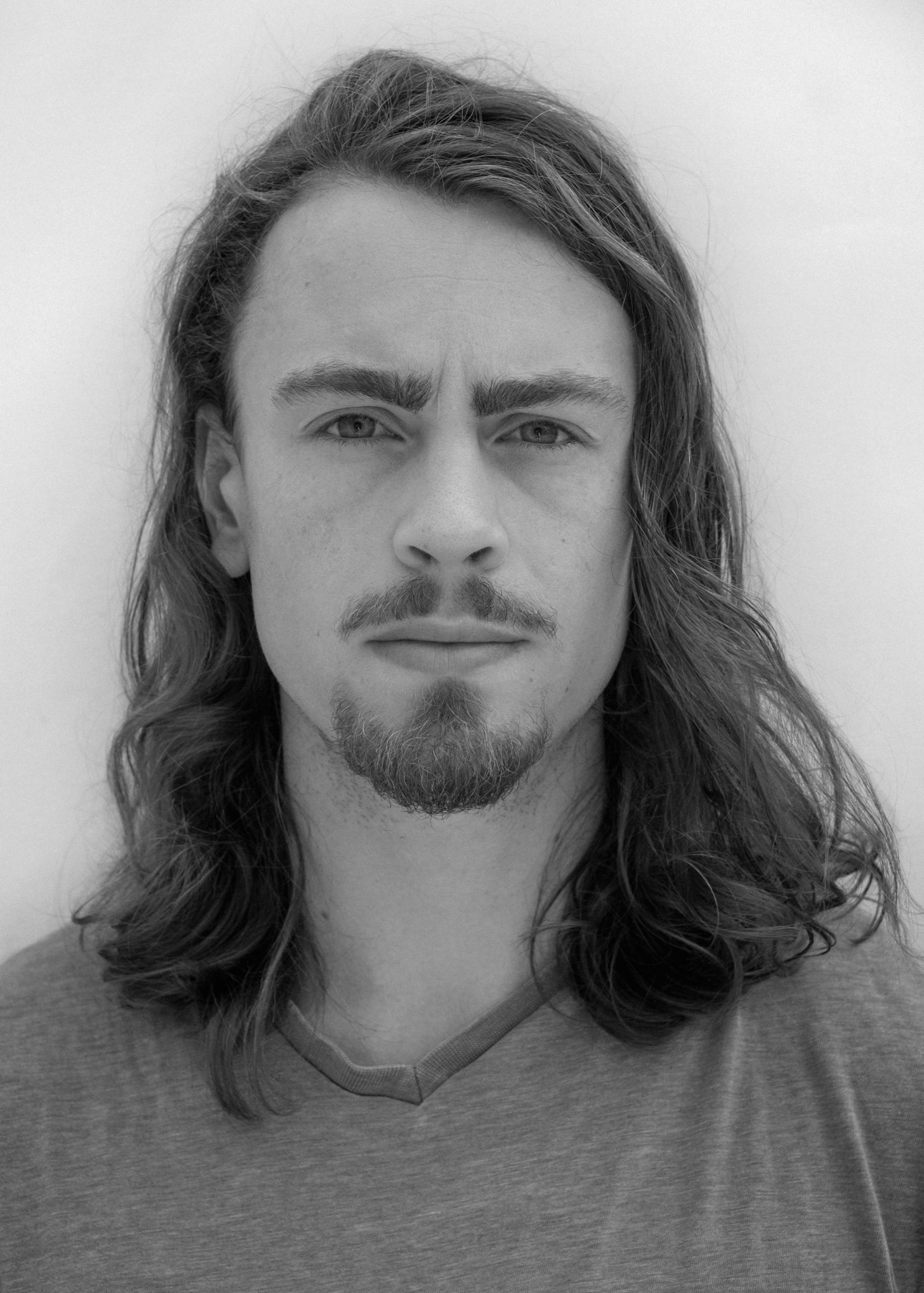 Ellissa graduated from Circomedia’s BA in 2019, a multi-disciplinarian specialising in acrobatics. Ellissa teaches acrobatics and marketing/media on our further education course. Alongside teaching on Circomedia’s Youth Circus and adult classes, Ellissa is part of Circomedia’s marketing team.

Since 2014, she has worked extensively with a multitude of companies: Cirque Bijou, Above and Beyond, Baseline circus and more. Performing acrobatics, flying trapeze and manipulation. 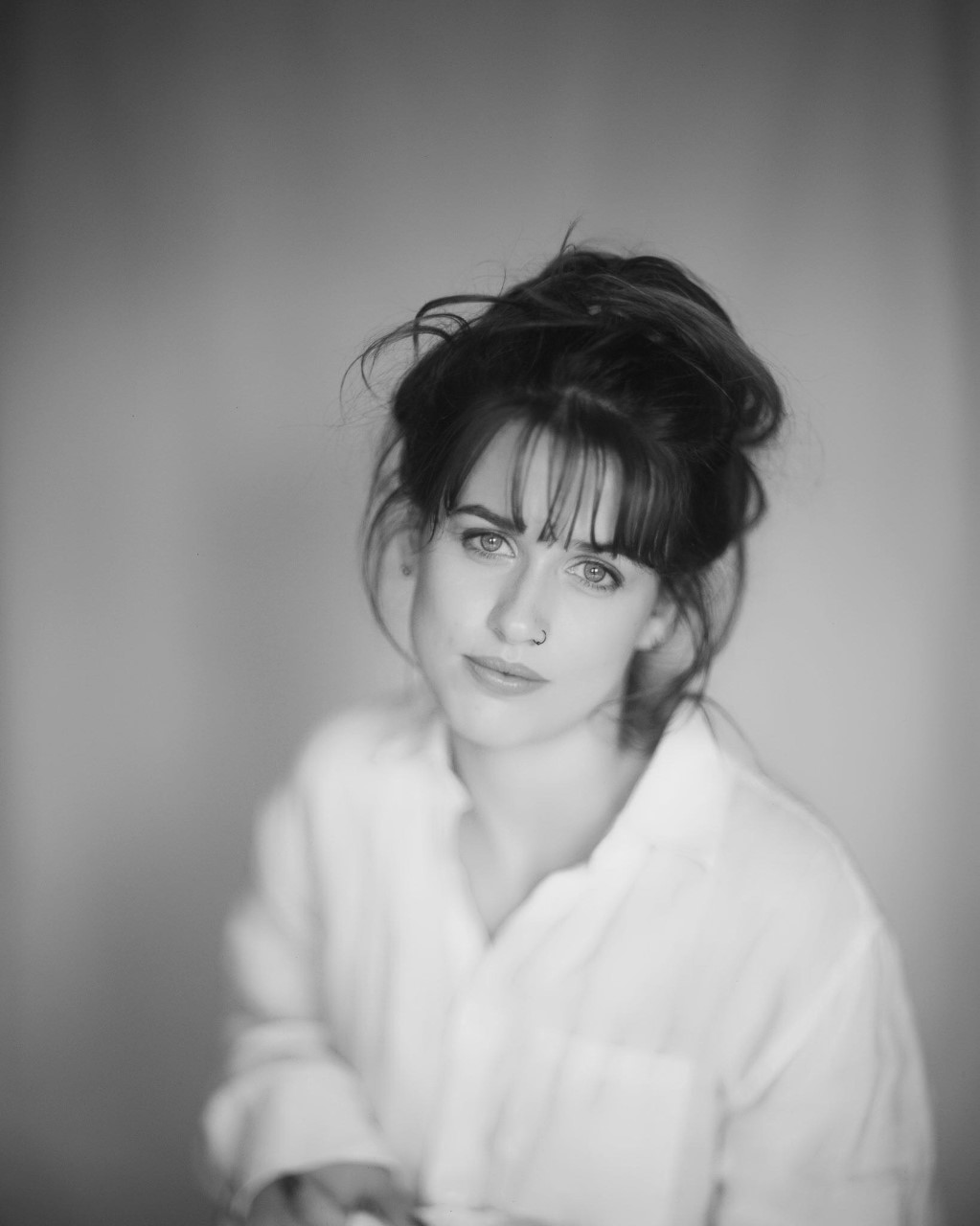 Ruby is one of the Aerial teacher’s on the BA course. She has been teaching aerial to adults and children since 2013, including regularly coaching flying trapeze for Gorilla Circus. She performs static and swinging trapeze for companies such as Cirque Bijou and Above and Beyond at various festivals and performs political street theatre with Bim Mason’s satirical masks. She is also a circus journalist, writing reviews for The Circus Diaries at Edinburgh Fringe and running her own circus podcast ‘Not My Monkeys’.

Not my Monkeys Podcast 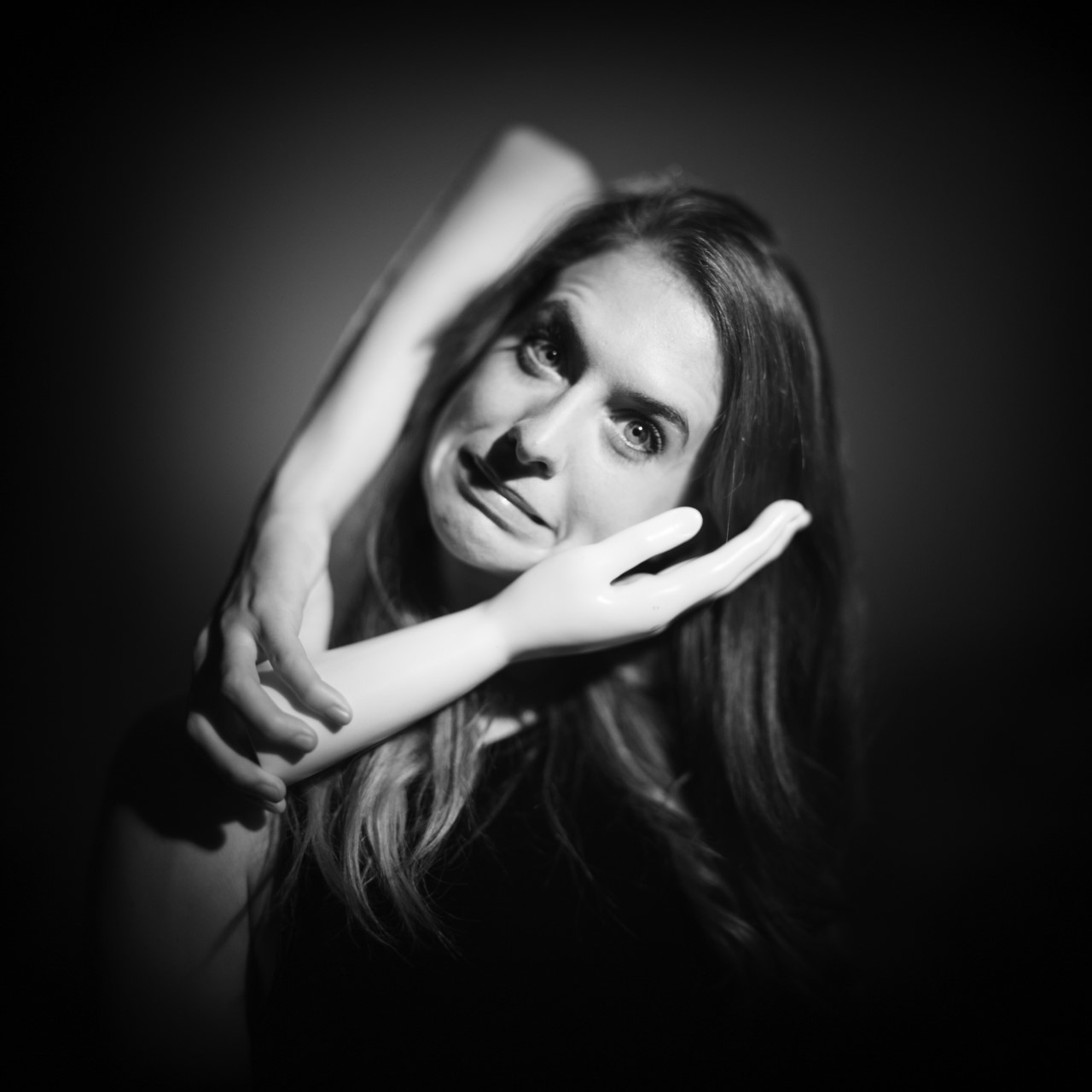 Jordan is an Acrobat and Hand balancer. Graduating the BA at Circomedia in 2020. Now the BTEC tumbling teacher here at Circomedia. 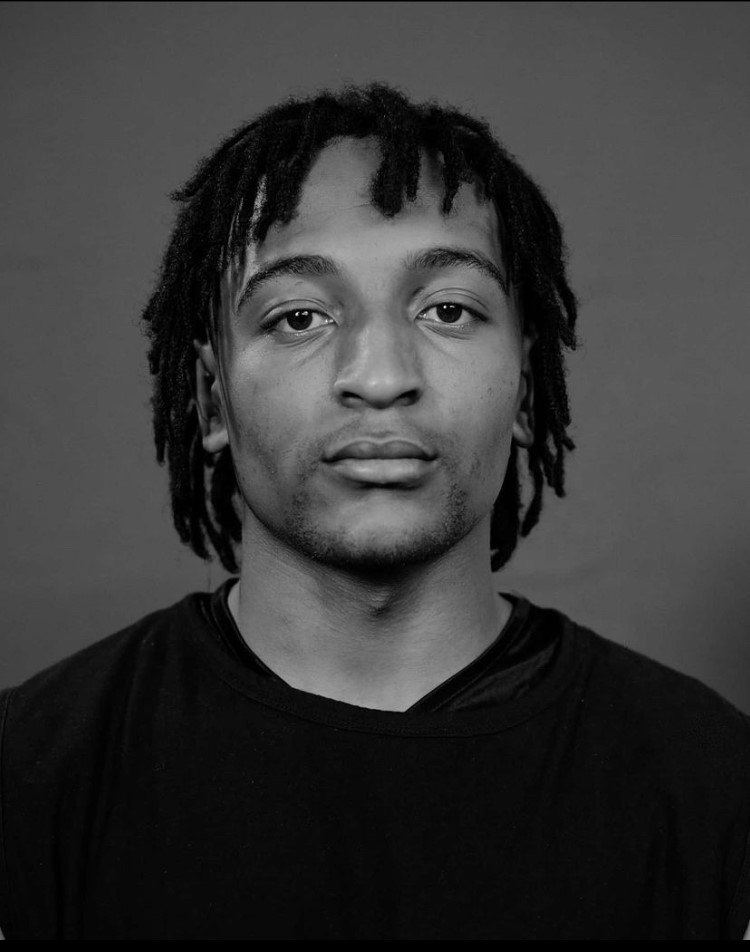 There’s something for everyone here. It doesn’t matter if you haven’t done circus before because whatever you do you’ll be supported to explore your creativity.

I can’t really overstate how much Circomedia has done for me… Most of what is rich and interesting in my life now is a direct result of all [their] hard work. Thank you Circomedia!

This brand new MA in Directing Circus is a really exciting development not just for Circomedia but for circus everywhere.

Circomedia encourages you to explore your creative potential, to dig deeper, work harder, and to always find joy in what you do.